A major goal this year was to expand our apatite mining works, due to the large demand for this gemstone developed largely through Madagascar Minerals marketing efforts in the past few years. Though we have had many mining permits in the south of the country for many years, this was the first year an extensive exploration effort was conducted regarding these permits. We are pleased to report that the exploration and samples removed from a number sizable ore bodies and brought back to the factory for testing have confirmed that the samples are of high quality. Note also the photos of blue/white agate and a blue translucent quartz that was also discovered in the exploration areas. The area also is a new source of petrified wood. 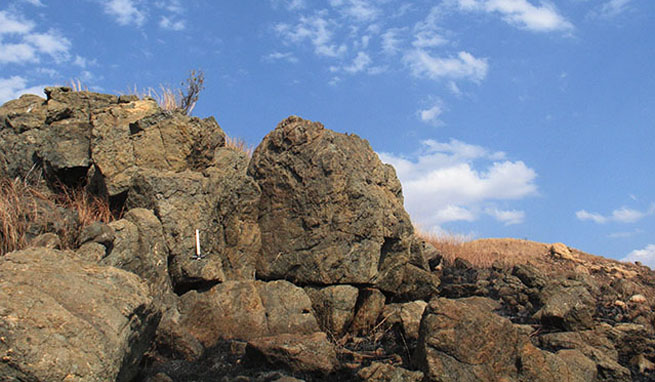 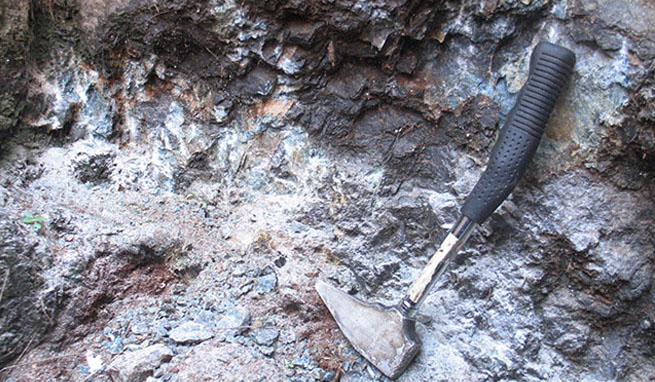 Exploration projects last year and a further project this year in and around our amazonite mine has yielded new veins connected with the original ore body. Additional exploration in the area has revealed a number of new unrelated amazonite outcrops that will be opened up in the coming year. 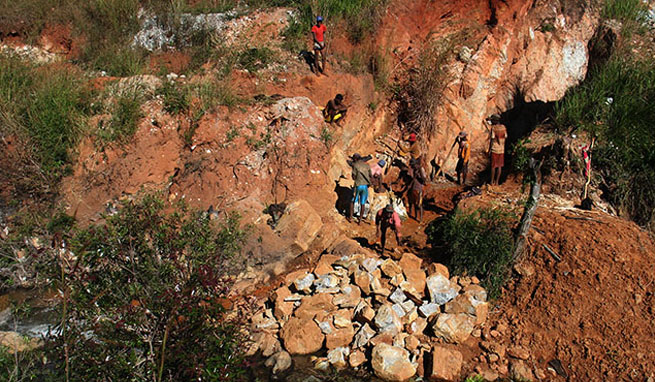 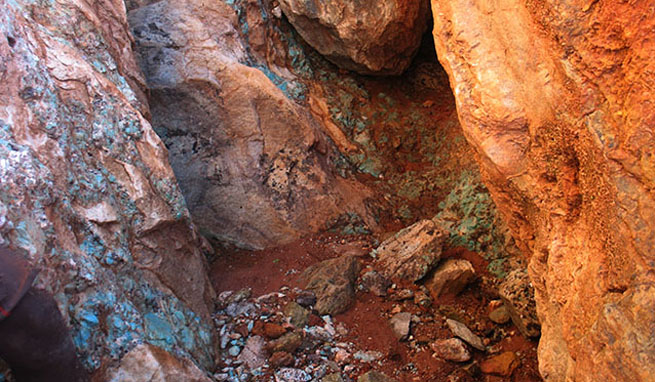 The Peacock Blue Labradorite Mine continues to yield a large amount of gem material as a by-product of the quarrying operations. The large blocks are cut out and shipped off to China where they are cut into high-end slabs greatly prized in the counter-top industry. The gem labradorite is removed by hand breaking from the waste blocks removed from the quarry. And the accumulated waste will provide years of rough for gem extraction used for carvings, jewelry cabochon, sinks and gemstone composite slabs. Social activities are continuing as the area is generating good profits so that Madagascar Minerals on their part is funding a number social projects to the local community including a new school. 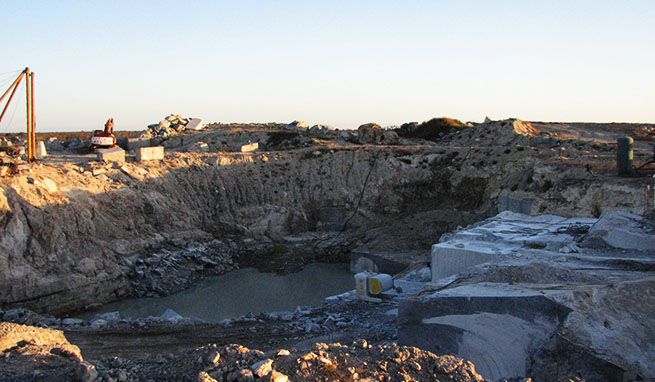 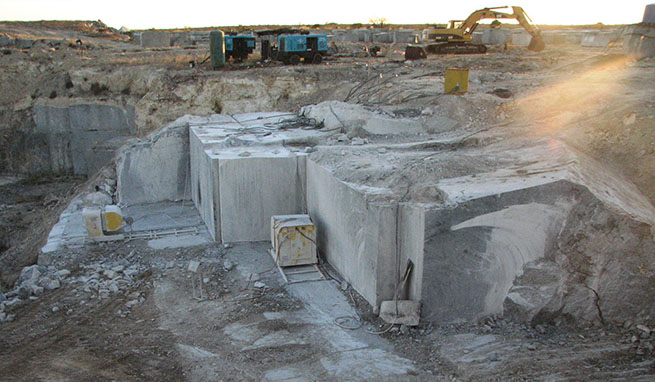 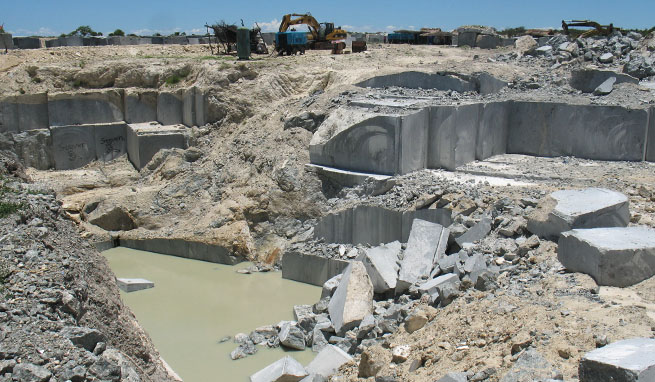 Midnight Electric Blue Labradorite is back in supply after years of shortages. Both the old mine and in new mine are providing a high quality material and we are pleased to be back working with this material in large amounts. 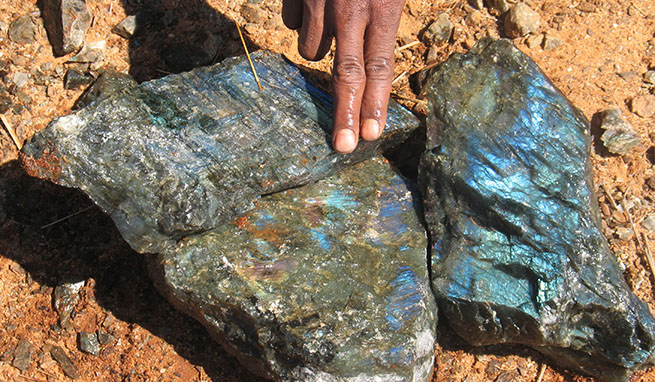 Perhaps you have seen or heard about it in the past from us, but Bianca (white) labradorite is now again available. The colors are subdued but the effect and the natural neutral-ness of white makes this material an excellent material for many applications. 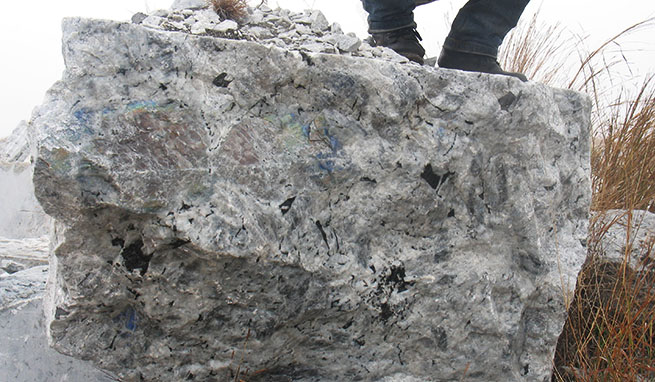 The northern agate fields continue to astound us yielding an amazing range of agate types: banded, colored marbling, dendritic, clear and moss. further digs and sampling over the past year confirm that the fields will continue to yield large quantities of agate for a great number of years. Madagascar Minerals is this year contributing money, supplies and labor in some social activities in the area including a renovation of the local school. 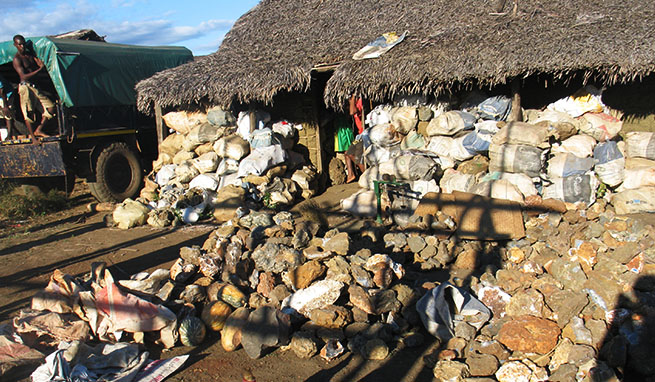 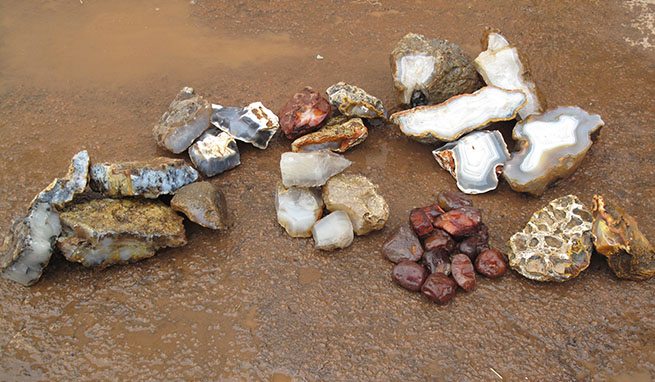 New production of druzy agate and fossilized coral from the western regions are now in processing at the factory and large supplies will be available at the Tucson Show next year. Many of the druzy and coral agate piece are excellent mineral specimens and others are yielding beautiful cabochons. The shapes and patterns of this material is truly wondrous. 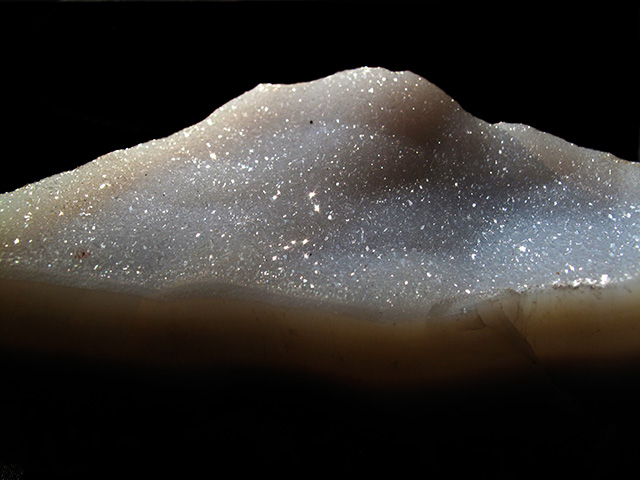 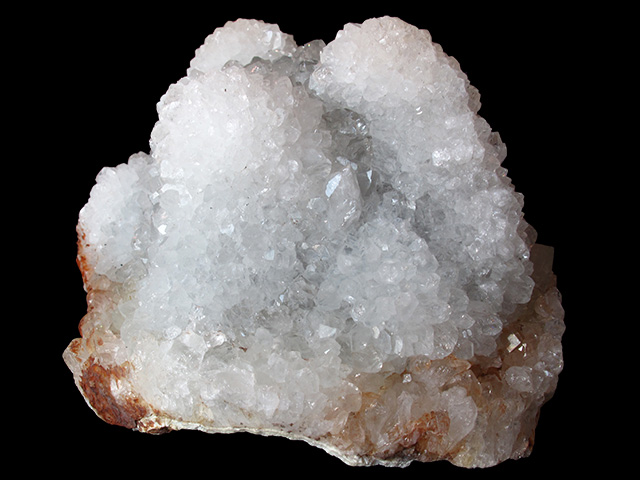 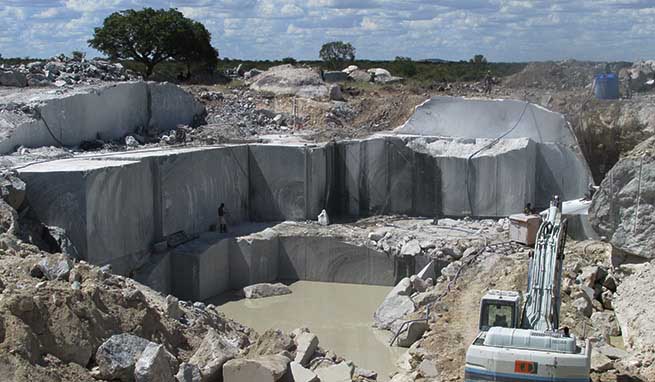 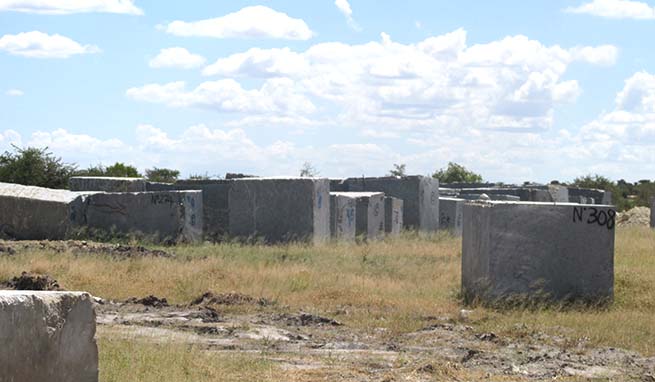 Norcross-Madagascar Group's Labradorite mine near Maniry expanded at its fastest pace in 2014.
Thanks to the block mining entering its 4th season, the deposit has produced its best quality to-date.
There have been many challenges that have prevented the natural supply and demand model from developing.
From 2009-2014 there was a revolution. The new government allowed the local governments to manage their tax collection. This permitted the local mayor at the Labradorite quarry to demand 300% increase in taxes this year. The quarry was shut down for 3 months, and in the end, NMG had the original tax model back in place, and the mayor, a new partner in assisting clamping down on the theft. The smell of money can do a lot of things...

As the quarry develops the gemstone crystal size has increased, exceeding the famous traditional darker Bekily Labradorite. The change was so dramatic in 2014, that Norcross discontinued the Bekily material, located 60 km to the north, in the same Labradorite geologic formation.

NMG was famous for the Bekily model, and will continue to offer this material to clients, but at 3X the price of Maniry material; we will let the market decide.
The popularity, lower price, and demand grew so fast that NMG was not prepared for the rampant theft into the local market in the capital city of Antananarivo. The Maniry material has a dominant peacock blue color, and famous rainbow or multi-color flash. Tucson gem and mineral traders like to market this material as "new find", or pretend they have located some new special material exclusive to themselves. There are only 2 quarries that produce gemstone grade, and they are mentioned in this release. NMG, despite mining the material for > 13 years, only made the material available for local market starting last year, when the quality became equivalent, and even better than the Bekily material, with 50% better yield. Labradorite granite block mining has been taking place in Madagascar for the last 12 years in about 10 quarries within the same Labradorite outcrop in 2 hotspot regions. In the beginning, the low grade material with little flash, was still significantly better than Labradorite blocks mined outside of Madagascar.

Today, only the 2 traditional gemstone quarries produce material with significant crystal flash. Working the other areas is a big risk, since the market pays for the flash or "labradorescence". The quality in the NMG Maniry quarry has increasing each year for the last 4 years, and along with the Bekily material has forced lower-grade granite Labradorite quarries in Canada, Finland, Norway, Ukraine, and Russia to close down. NMG is currently in negotiations with an eastern European (Labradorite) mining company, to lease the other half of the quarry, which was held in reserve until now. NMG has negotiated to take 25% production in exchange for long-term leasing rights. Although NMG left this side available for Norcross's own desire to mine blocks by itself, having the proposed agreement in place allows NMG to transition into the granite block, slab and tile business with production and inventory through the lease, at minimal cost.

The increased production from NMG's Chinese mining company has left approx. 2500 trucks of gemstone Labradorite "waste" from the block production. Despite reasonable security in place, trucks have managed to sneak in and out during the evenings with the help a few motivated locals. The competing quarry in Bekily moved to a non-gemstone area this year, making the NMG quarry in Maniry the only quarry currently producing gemstone.
Previously there were 8 block operators. Today there are only 2 profitable. The largest producer in 2013-2014 is located inside the NMG quarry.
Due to the overstock of gemstone material, NMG has been marketing it locally at 1/3 the normal price to help popularize it.

A vessel sink production line was purchased in China this past July, and arrived in December. The sink line is being installed now, and production should start before March. The sink line will consume blocks too large for gemstone industry, producing up to 50 sinks per week. Norcross has been manufacturing gemstone sinks for the last 6 years. These sinks were carved by hand, and produced at a pace of 2-5 per week. If the demand for sinks grows beyond the manufacturing capability, NMG will keep adding additional sink production lines.
Gem Decor, another NMG brand, will be introducing the sink line exclusively through Forte in February. Forte is a Decorative Hardware and Plumbing Buying Group representing 250 luxury kitchen and bath showrooms within US, Canada, and Mexico. 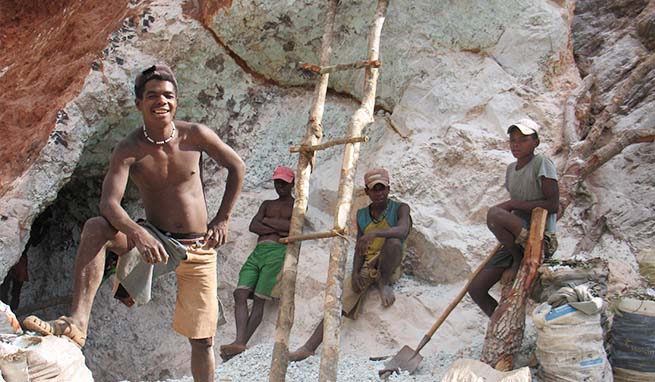 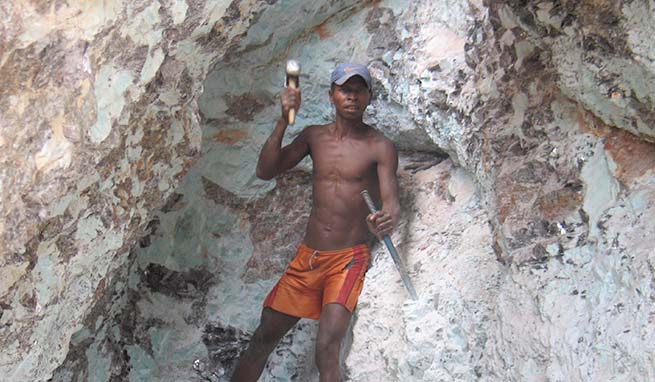 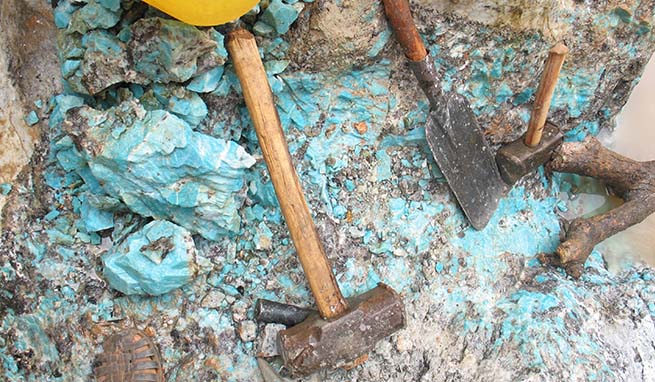 Production increased in 2014, still far short of demand. Roads and bridges still need to be developed. 3 new outcrops were discovered to help increase production 50% over 2013. Specialized 4x4 mountain-climbing transport vehicles need to be acquired to eliminate the use of cow and sled methods. Pneumatic drills need to be employed to speed up production. Earth moving equipment cannot be used until sufficient roads and bridges are built.

In 2007 Norcross introduced blue apatite into the market from several of NMG apatite properties.
The specially heat-treated material has incredible neon-blue color, and typically sells out. However, NMG made the decision not to stabilize the rough it sold; expecting the clients to do so on their own. This was a poor decision. NMG's stabilization method was also not very effective, allowing the apatite to be not very durable. NMG has since mastered apatite stabilization, and starting in October 2014, all material that has left Madagascar has been stabilized. NMG encourages any apatite rough buyer in 2007-2014 that had a bad cutting experience in the past, to please come forward now, with proof of purchase, and NMG will provide you with free stabilized samples. 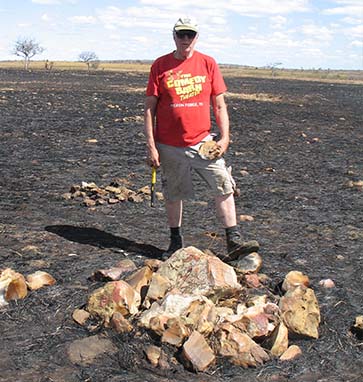 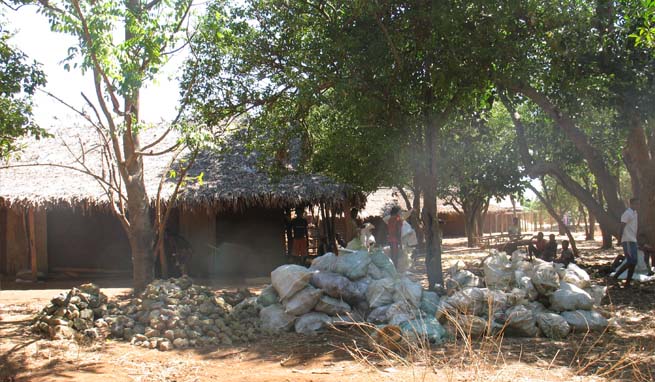 The areas around the agate with little material were not claimed.
Both claims were not monitored and only worked a few times per year.
NMG was not aware of the level of theft that had been occurring.
In July, NMG discovered 15 separate Chinese groups stealing inside the claim, with 40-80 tons being shipped to China every month, and 10 tons going to the capital city, Antananarivo for local lapidaries.

Since July, NMG has worked hard to shut down the stealing, stopping about 75% of the problem inside the Abarijeby claim, involving most the Madagascar carnelian and Desert Jasper (actually a rhyolite, and NOT a jasper). The poaching of the Desert Jasper, a rarer stone within the claim, to the local market, was so excessive that the main deposit of this material was finished off the surface. NMG was forced to go into unexplored reserve areas of the claim to get a truckload of material last month.

All thieves were warned not to come back in August. By September many thieves came back. In October, NMG was forced to arrest a few defiant groups. During the arrests NMG learned how the Chinese live in the cities, and order Malagasy traders to go into our fields and instruct the local people to start collecting and selling material. Once the containers of poached material were slowed down, the demand in the market in China increased, causing several Chinese clients to reach out to NMG in order to get the material they wanted.

An agate treatment facility is being built to keep up with the demand for treated agate. Tumbling experiments motivated NMG to solve the apatite stabilization problem.

NMG's tumbling factory was recommissioned last summer. Testing and repairs began in the fall. New machinery is ready to be purchased, as Norcross increases production with goals of 20 metric tons finished per month. NMG has mastered processing stones which have never tumbled successfully: apatite, labradorite, and amazonite. For 20 years Norcross' old tumbling system failed to polish soft stones, and difficult-to-polish stones (like Labradorite). NMG, through trial and error, has partnered with a Chinese abrasives manufacturer with high quality grit and polish. One of the delays has been the process of re-training skilled staff with the new methods and technology.

Norcross is sad to report its plan to pull out of 4 gem shows in 2015.

NMG has dropped 4 Martin Zinn Exposition shows in 2015. The decision was made in order to exhibit the Gem Decor brand into architecture and design, kitchen and bath, granite and marble, furniture, and select gift shows. New shows will be announced shortly.

Discontinued shows:
Santa Ana (spring and fall) CA, Denver (spring), Springfield MA - East Coast show.
The decision was made based on low growth potential, compared to the other markets mentioned above.
NMG will continue exhibiting in all other shows, and will be reaching out to all clients developed over the last 12 years to continue to develop these special relationships. Thanks to the Marty Zinn team for all their support.